In 2020, 9.7% of the labour market in Singapore consisted of ‘own account’ workers, essentially self-employed and freelancers. 84% of these declared their freelance income as their primary source of income. Exacerbated heavily by the “working from home” in a disconnected work environment, we all know someone who’s been doing something on the side to try it out. Hell, if it works, that could 100% be our main source of income, right?

That’s what we’re discussing today. The job market isn't built for freelancers – which is quite surprising.

Freelancers rarely meet the years of experience required mandated by most companies, simply because this is an outdated figure. With the rise of remote work, the highest ever job-hopping rate in history, and the ability to take on projects on your own even within companies, what constitutes a great profile is changing.

A growing trend to move away from resumes as a screening criterion is rising in the west. Its spillover effect is visible even in our part of the world, it’s a common sentiment I’ve been hearing more and more of in the HRTech world, and amongst forward-thinking companies. When that gets here, there won’t be a need for this article. But until then, resumes still reign supreme for early talent identification, leaving freelancers at a heavy disadvantage here.

Think beyond profiles, why freelance?

Maybe consider carrying over the tests of freelancers into the permanent hire world. A proven track record received through a structured testimonial or review system could give us an intimate look into their behaviour around work projects and environments that they’ll be engaged in after joining your company.

The most common argument? And it’s true.

Freelancers who have never worked in a corporate setting may have difficulty adjusting to the culture in any large company. The experiences are vastly different, and the culture gap between reporting to yourself and joining a highly collaborative team is far apart.

This might prove a significant onboarding challenge, but if both the candidate and the company are aware of this and take a structured thought our approach to their onboarding, bringing them up to speed with the organization, you’ve got an employee with the most end-to-end real-world experience you can find.

Another interesting trend from our market analytics is that while freelancers' retention rates are relatively low, they tend to be some of the highest performers, eventually being poached by competition after growing significantly. I don’t intend to generalize, but trends suggest as such, which means extra caution in retaining your high performers is to be applied.

Hiring’s really not all about the brands you’ve worked at and schools you came from. It’s about finding indicators of potential. And freelance work gives us a lot more insight into a candidate than we usually give it credit for.

A pre-requisite of this of course is the abolishment of screen-out methods, but that’s a discussion for another time.

The next time you come across a profile with “Freelance” as a title, I hope I’ve made you consider twice.

If you found this interesting, be sure to check out our piece on the Short Term vs Long Term hiring, where Dipansh breaks down the pros and cons as well as appropriate uses of Short-Term hires. 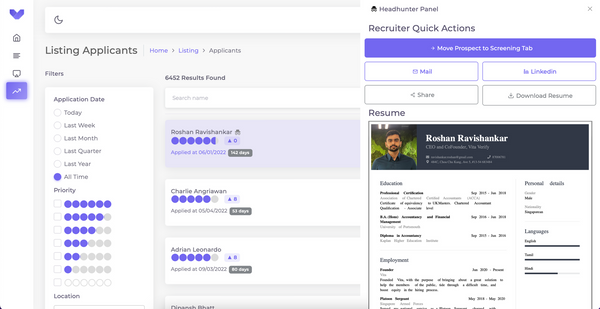 Started as a pan-university research task force to study the correlation of undergraduate students' life projections towards success in their careers. We've evolved to analyse the evolving talent landscape and worked with recruiters to develop an incredibly powerful system that solves the biggest issue in Talent Acquisition, right from the Recruitment has traditionally been manual and heavily reliant on the intuition and experience of a recruiter. But there's an issue of scalability that comes with this. "Further, candidates and employers, tend to speak a different language, but they're speaking about the same thing" - Dipansh Bhatt, Head of Sales at

As candidates become more and more qualified, how do we know who to hire? What sets a candidate apart?